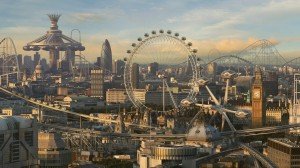 In 1988, the Los Angeles Times Magazine asked USC pro­fess­or Jerry Lock­en­our to help them look 25 years ahead. The results of this can be seen in the LA Times archives here.

I love reading these types of speculative future predictions; mainly to see what the hell I’ve been missing.

It also makes me think about how this will translate to London.

Reading through the articles, I’m struck by how much was not far off the mark. Some of the ideas have not turned up due to a variety of reasons, some of which I would suggest are political rather than technical.

“A day in the life” examines the various touch points of a possible future day. In the first part it talks about the mandatory staggering of leaving for work. Here in the UK they are seriously thinking about putting boxes into cars for traffic management and insurance purposes. How long before the congested roads of the South East require a trip booking system with allocation of slots?

The automated house is not far fetched. I would suggest that the depth of your pocket is likely to be the reason why this is not as wide spread as the article says it would be. The printing out of the newspaper is negated by the internet which was still a fledgling and poorly understood concept in 1988.

We aren’t at the “plug-in” car that adapts between roles yet, but we are definately close to the self drive car. You just need to look at what Google are doing and the DARPA competitions to see we are nearly there.

The personal robot is not a feature of current households as far as I know, but the other items mentioned in the 6.30 slot are around and are probably powered by our smart phones:

Unfortunately smoking is still with us and we are not down to the die-hards yet. As for the bed making, that’s still our task unless you have a home help.

No “Robopet” yet, but the education and entertainment items are definitely here. The range of education apps and the getting cheaper by the minute tablets means that the current generation of teenagers have never been so electronically connected and catered for.

Syd Mead gets a mention, as he should. He was and still is one of the most accurate futurists out there. If you haven’t seen “Dangerous Days: On the Edge of Blade Runner” then get yourself over to YouTube for a look. Syd Mead really did help set up the look for that film and others too. One thing he does mention that has not come about is the LA underground transit system. Again, I think political will rather than technical know how. You just need to look at London to see what can be done. I came down to London in 1987 and the increased number of ways of getting around now compared to then, is just mind boggling. It is also not enough as London has a population increasing quicker than the mass transport systems can grow. This point also allows me to wheel out some map porn.

The prediction that manufacturing will give way to the service industries is succinct. There is currently a small blip of US companies bringing their manufacturing jobs back home. This might be patriotic to some, but the reality is that in certain parts of the US now, wages are cheaper than in China. That is not progress, just greedy economics.

The article goes on to predict things about schools, housing, pollution and crime. All still big topics today and still not solved.

The “High Tech Teaching” item was definitely a good read. We haven’t got the translators, but the dedicated desks with integrated computer are a little way off. Actually, I’m not even sure they will arrive. The long term costs of a dedicated PC desk is to my thought a reason that they will not come any time soon. The pace at which small laptops and tablets are invading our education space is rapid and I feel has over taken this static idea.

It also mentions that every student is or was walking around with some sort of storage device. Just look at the cost of HDDs from 1988 $85.70 / GB compared to $0.07 now. Soon even those physical memory sticks will become defunct as we embrace cloud based storage systems.

The big storage news of that year, was the first 2.5-inch hard drive that used uses two platters to store 20MB. If you are wondering about the picture to the left, that is a 250MB HDD circa 1979. Look how much it was miniaturised in just nine years.

This year we will probably see the first 5TB HDD. We are slowly moving on from the HDD platter to Solid State Device (SSD) and today the biggest I’ve seen on sale is around half a TB. It is of course no longer about size, its all about speed.

These days the only memory cards I have are in my cameras. I do have a 1GB memory stick that I bought back in 2005 and it cost a fortune. I found it recently at the bottom of a bag that I hadn’t used in six months and do you know, I hadn’t missed it.

So where will we be in 25 years? Mega-Cities? London and Bristol linked up in one continuous urban sprawl. I hope not.