I found the event on twitter and was glad I went.

Sat in comfortable chairs in front of an eager audience with a glass of red wine, there was no reading from the book as I have seen at other events. It was really just a great chat between two authors who are very well versed in their subjects. All it needed was a big gothic fireplace behind them with a roaring fire to make it comfy. 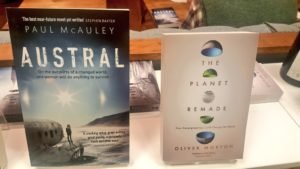 Paul started outlining some of the reasons and inspirations for why Austral is set in an Antartica without ice. And this started the cascade of topics which came thick and fast. After several glasses of red wine I tried to recall them all on the tube coming home. Here are just some of them:

To do this you would need to use a modern elephant. Then a member of the audience chipped in with their witnessing of an attempt to artificially inseminate an elephant. BTW did you know an Elephant is able to regrow it hymen came another factoid.

Did you know there was an author who wrote a book about mammoths and has eaten mammoth meat?

Apparently there is lots of mammoth ivory still lying around. Some folks make a living from digging it up.

Mammoths would be good for global climate as they get rid of forests, which in cold climates actually give off heat. There was an aside about goats and then the idea of having to breed trees capable of roosting mammoths.

An abandoned money making idea of a bespoke gin with ingredients from every continent. There is the problem problem of not much grows in Antartica. “Could use kelp.” The logistical challenges of getting Antarctic kelp to a distillery in London, so idea abandoned.

An annotated version of Frankenstein worth having (this one I think: Frankenstein: Annotated for Scientists, Engineers, and Creators of All Kinds.) The perils of replicating Frankensteins experiment within a modern university funding framework. “You’ll have to stop referring to it as a monster.”

Back to the book. Inspiration for Austral location from a trip though Norway. There was also mention of a map of Antartica without the ice.

Would that tall actress make a great person to play in a film. What’s her name. “Gwendoline Christie” came the answer.

There were some questions from the audience and then event came to an end. I’m a shy sort, so when I got my book signed, I asked my question to both Paul & Oliver.

“I’m a PM for my sins and I know how hard a big project can be to organise: funding, buy in, logistics etc. So is there something that everyone could do or stop doing to help paper over the cracks until the best big solution to climate change is put in place?”

The answer was in two parts. Firstly stop flying and driving fuel powered cars, but that isn’t practical, so the second answer was stop eating meat or eat something that wasn’t derived from large gas producing herds, e.g. Lab meat or some other substitute.

Interesting answer. One I’ve heard before from many sources. Vegetarian or otherwise. To implement that voluntarily would have quite major impacts for farming, culture, the landscape, even the clothes that we wear. Note to self: must look into what would the full impact of that be. Would it make an good short story?

Looking forward to reading both books. They’ve gone on my book backlog. I’m still getting through the ones I picked up at the Adam Roberts and Jeff Noon event. Must read faster.